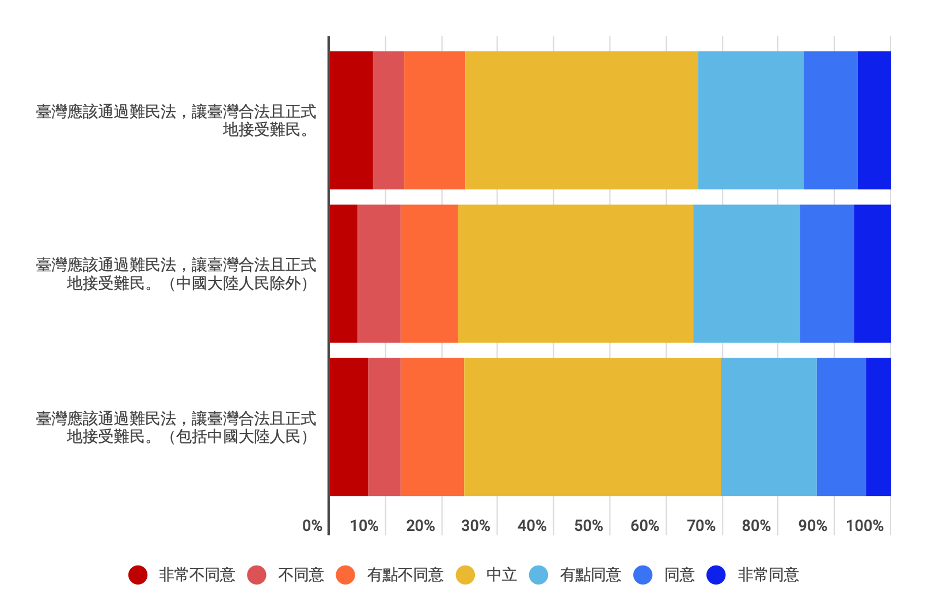 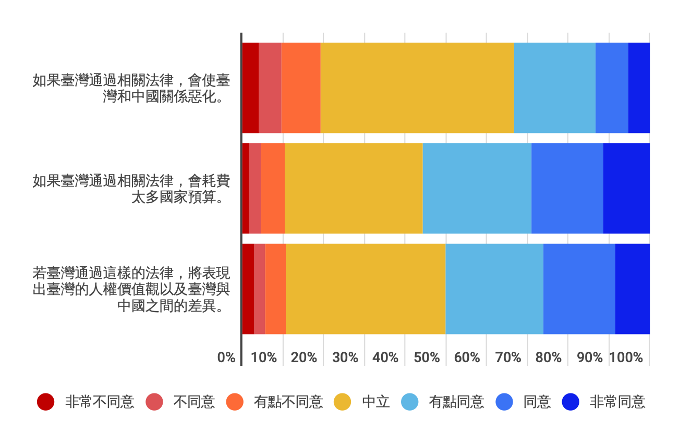 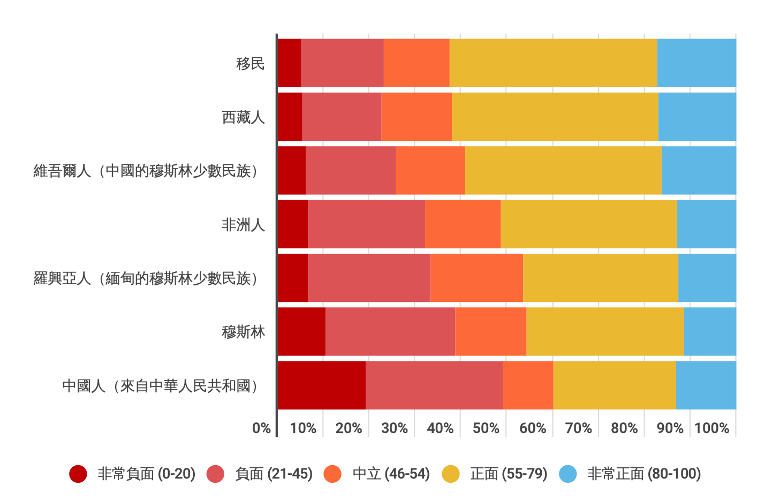 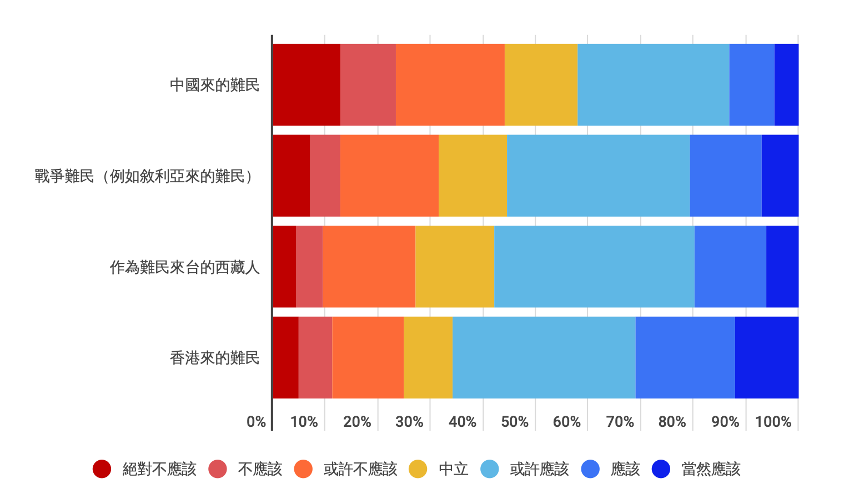 Taiwanese public opinion on asylum in 2022

Taiwan is considered to be one of the most progressive countries in Asia but has no asylum law. Due to its precarious political status and complicated relationship with China, there are serious concerns surrounding this topic. However, what makes the situation direr is the lack of substantial discussion and social dialogue on this in Taiwanese society. What do Taiwanese people think of passing an asylum law in their country and how do they perceive refugees?

Taiwan is considered to be one of the most progressive countries in Asia but has no asylum law. Although the country has accepted international human rights treaties as domestic law and thus has the obligation of non-refoulment, in the absence of an asylum system the island has not been able to handle people coming to Taiwan seeking protection. The International Review Committee on the Implementation of the International Human Rights Covenants (that Taiwan has adopted as domestic law) has repeatedly recommended a “speedy adoption of a Refugee Act, which should also include the principle of non-refoulement“. There has, however, been little progress, likely because it is a complex issue involving cross-strait relations.

Due to its precarious political status and complicated relationship with China, there are serious concerns surrounding this topic. However, what makes the situation direr is the lack of substantial discussion and social dialogue on this in Taiwanese society (with the exception in 2019 when Hong Kongers started arriving en-masse to Taiwan) and the political elites have perhaps purposely kept it that way.

There have been only very few nationally representative surveys on people’s perceptions and attitudes toward refugees and toward a hypothetical asylum policy, and even less that would have a broader focus than on people arriving from Hong Kong. Why are surveys important? They give a good glimpse into people's perceptions. And taking people’s perceptions into consideration is important because they often have real-world implications. Taiwanese politicians heavily depend on public opinion, especially on sensitive topics that involve Taiwan’s relationship with China, and discussing a potential asylum law in Taiwan inevitably touches on Cross-Strait relations, which are already very tense.

This article presents the results of a large-scale nationally representative survey – the Sinophone Borderlands Indo-Pacific Survey[1] – and provides a comprehensive picture of Taiwanese people’s preferences when it comes to people on the move (refugees) and a potential asylum law. The Taiwanese part of the survey data was collected online (in Mandarin Chinese) between May and June 2022 by a local agency. The sample is nationally representative in terms of age, gender, and regions, with 1,350 respondents.

Regarding potential asylum mechanisms in Taiwan, slightly more people agree than disagree with having to pass some kind of a refugee act (the respondents were provided three different versions - a general refugee act, a refugee act that would exclude Chinese nationals, and a refugee act that would include Chinese nationals), but most people actually do not have an opinion on this. This lack of stance reflects the lack of discussion about asylum in Taiwanese society. Interestingly, there was barely any percentual difference in the answers to these different versions: 23–24% agreed, 30–34% disagreed, and the largest part, 41–46%, neither agreed nor disagreed with adopting an asylum law (see Chart 1). 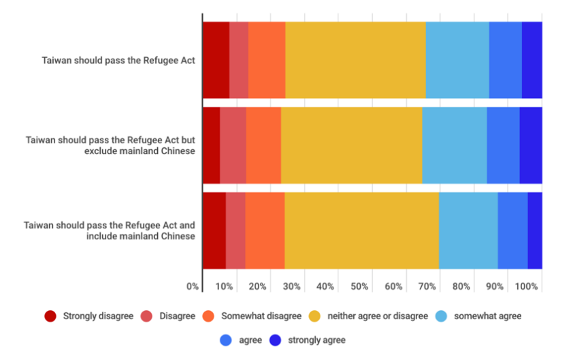 Chart 2: People’s opinion on the consequences of passing an asylum law 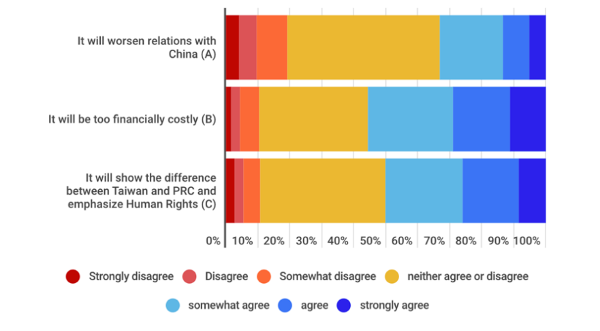 In all of these three questions above, the dominant answer was ‘neither agree nor disagree,’ which can be interpreted as people not really having clear opinions on the issue. There was almost no difference between the answers of pan-blue and pan-green supporters, except for the human rights values question, where more green supporters (59%) agreed than blue supporters (46%) that adopting an asylum law would highlight the human rights values of Taiwan and show the difference between Taiwan and China.

When it comes to people, the potential beneficiaries of an asylum law in Taiwan, most groups (whether ethnic or religious) – Muslims, Immigrants, Africans, Rohingya, Uyghur, and Tibetans – were viewed rather positively, with immigrants in general viewed most positively (63%), followed by Tibetans (62%), and then Uyghurs (59%). Chinese people from the PRC constitute an exception – they are viewed negatively (49%). The Rohingya (a persecuted minority from Myanmar), while they are viewed more positively than negatively, they have the most neutral answers of all (20%), which may indicate they are not very well-known in Taiwan, and people thus tend not to have an opinion (see Chart 3). 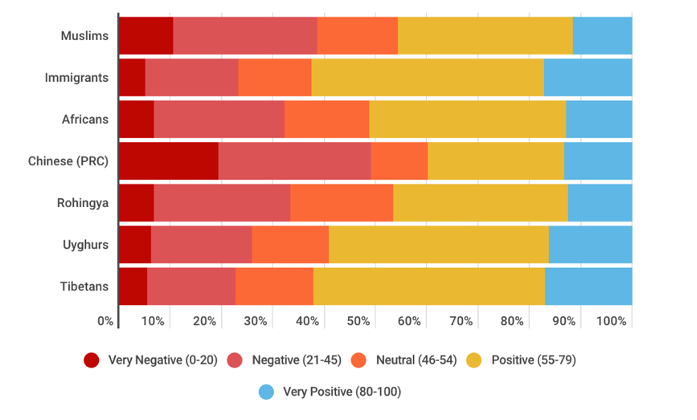 More specifically, when asked about accepting certain groups/nationalities of refugees, Taiwanese people were very favorable toward people from Hong Kong (66%), Tibet (58%), but also toward war refugees from other countries (55%), but again rather unfavorable toward refugees from China (44%) (see Chart 4). 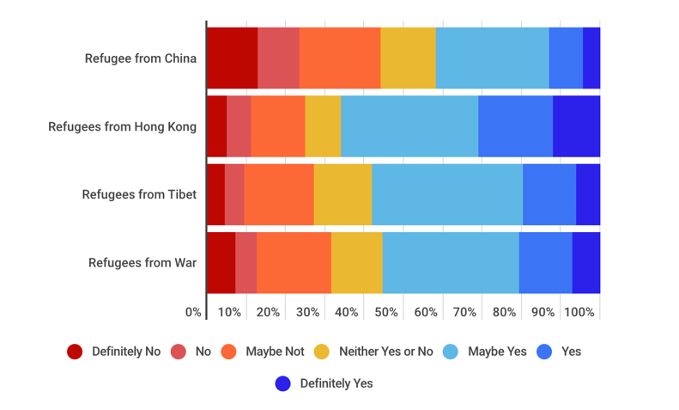 Most people in Taiwan (58%) even support the resettlement of the Rohingya people – a displaced minority from Myanmar, currently living in refugee camps in Bangladesh – into Taiwan, in comparison to 29% of people who are against it (see Chart 6). Very clearly younger people were more inclined to resettle them than older people, and men a little more than women.

Chart 6: People’s opinion on resettlement of the Rohingya people to Taiwan

While it is apparent from the data that there has long been a lack of discussion about asylum, the data has also shown that people tend to rather agree that Taiwan needs a proper asylum system and not handle incoming people on a case-by-case basis as has been done until now. Also, refugees are seen rather positively than negatively, with people from China as an exception, and Taiwanese people are willing to accept them in Taiwan.

The results from this survey should be understood in the context of the political climate in which the data have been collected – between May and June 2022 – which is only a few weeks following the Russian invasion of Ukraine, which has fueled concern over China’s plans for Taiwan. Many in Taiwan speculate that the odds of an invasion by China have increased. With such fears of their own future, people tend to be more compassionate toward other people who are forced to leave their country of origin and seek refuge elsewhere.

At the same time, the lower willingness to accept Chinese people as refugees brings us back to the issue of complicated relations between Taiwan and China and highlights the need for social dialogue before any solution – whether an asylum system including or excluding Chinese nationals – is accepted.

Kristina Kironska is a socially engaged interdisciplinary academic with experience in Taiwan Affairs, CEE-China Relations, Myanmar Studies, human rights, election observation, and advocacy. Currently, she is conducting research within the Sinophone Borderlands project administered by Palacky University Olomouc. She is also the Advocacy Director at the Central European Institute of Asian Studies, and Board Director of Amnesty International Slovakia. She can be reached at: k.kironska@gmail.com. 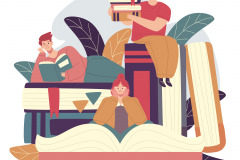 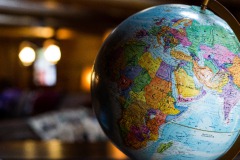 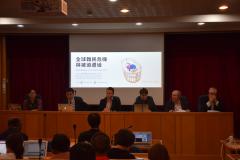